My ideas are all Legendary Weapons. All effects are not permanent unless specified 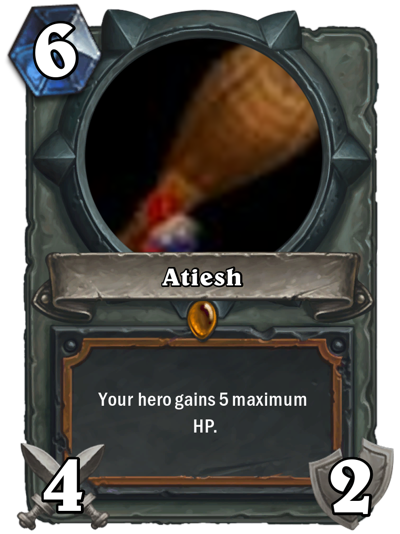 This card increases your hero's Total hp by 5, making full health 35. This is permanent so if you were to "Tree of Life", "Healing Touch", ect. you could heal back to 35. When this card is played it will heal druid for 5 since 5 is being gained (current hp is 16, will be healed to 21) If Druid is silenced it won't lose the 5 health gained, but its health cannot return above 30 after the silence

Shaman - Hammer of the Storm

This weapon is capable of freezing or silencing the minion (or hero) you attack.
reasoning behind this card :
Why does it not have overload? becuase many of shamans cards already have overload, and I feel like this weapon does not need it with its weak stats.
What decides if it silences or freezes? 50/50.
What happens when you attack the enemy hero and you get it silences? It will silence the enemy hero's weapon. Any passive effect of the weapon in question will be silenced. (DOES NOT SILENCE ARMOR OR SECRETS)
I will show what will happen to each of my weapon ideas if it is silenced.

I have been having problems with the card loading so if the card does not load there is a backup of the weapon image
The High Blade is a 5 mana 4-2. its ability is "Your hero gains Divine Shield on each attack". The effect is the same as if it was divine sheild on a minion, you will not be damaged by the thing you attack or be attacked by. you will also not loose your divine shield if you attack something with 0 attack (including the enemy hero). If you attack and you already have divine shield it will not double up.
this weapon is comparable to Truesilver Champion, becuase it is 4 mana 4-2 but its ability heals you and does not protect you from the damage you take from attacking.
If you are silenced you will lose divine shield and you wont be able to gain anymore.

This warrior weapon is one of my favorite ideas becuase it doubles as an effective early weapon, but also a situational weapon. Its ment to combo with cards such as Rampage, warbot, Acolyte of Pain, and could be possible in patron warrior. Yes you will tkae damage from your own minions.
I purposly made it crap stats because the main purpose of the weapon is to attack but not kill your own minions. Its mana cost could be debatable since it has armor gain but I think 3 mana is a good start.
If your hero is silenced you will not gain armor on attcak and you cannot attack your own minions. 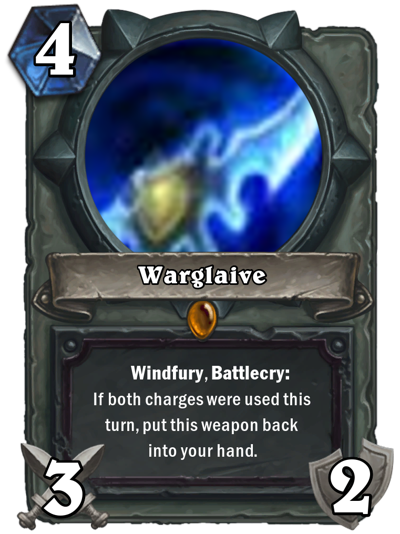 The Warglaive is a weapon that is centured around playing this card multple times. I think some poeple may say that this card is overpowered because it basicly has infinite uses, but it is not. The weapon cost 4 mana, therefore you have to wait till you can play this at 4 mana (3 if you use coin) and you cant play any minions. If you want to save one of the charges it just ends up being fiery waraxe with windfury. Since its 4 mana, you can only play this twice in the same turn before you run out of mana. If you are silenced, the weapon will lose windfury.

The next 4 cards have a new trait that is not already in Hearthstone. This trait is "Ranged Attack", Your hero will attack without reciving damage. Using a ranged weapon is the same as a normal weapon and will lose durability on each attack.

This weapon was was ment for a deck involving spells. Although the actual weapon stats suck for 4 mana, its spell damage is very strong. Its a great combo with low cost spells that would suck on their own like arcane explosion, arcane missle or flame cannon. The point of this card is to turn away from mech mage and get some good old ice lance combo (with weapon it would do 24 damage!) I understand that is way overpowered but remember its a legendary so you can only have one in your deck. not to mention a full ice lance combo would costs 10 mana and if the weapon breaks you will lose the spell damage.
If your hero is silenced the spell damage is gone.

The Netherstrand Longbow changes your hero power changes to 3 damage instead of 2. The change is not that useful until you can hero power at least twice. however the weapon has horrible durability, being destroyed in one use. Its high mana cost and low durability keeps face hunters from using this. It could combo well with Steamwheedle Sniper.
If you are silenced you hero power reverts back to 2

This "weapon" can only attack minions. The minion you attack is healed 2 hp. It is ment to be another way to heal your minions. You cannot heal yourself.
If your hero is silenced it becomes a 0-4 (completly usless)